My friend Richard has an MFA in Creative Writing. My friend Joan has an undergraduate degree in art history. If the popular stereotypes had been accurate, those degrees should have qualified them for successful careers behind the counter in the fast food industry. But to the best of my knowledge, neither Richard nor Joan has ever hawked a Happy Meal or super sized soft drink.

Richard, in fact, has parlayed his MFA into a phenomenally successful career in public relations. Joan, meanwhile, is an executive at one of the country's "big four" television networks. I once thought that my friends' success was in spite of their backgrounds in liberal arts, but these days I'm not so sure. The more I learn about the subtleties of leadership and effective management, the more I believe that a liberal arts education was the key to their achievements.

Allen Salikof, president and CEO of Management Recruiters International in Cleveland, agrees with my assessment; he believes my friends' experience says a lot about the value of a liberal arts background in today's business world. "The higher you go in the executive ranks, the [more the] benefits of having a liberal arts background really come into play, " he says. "With the liberal arts, you have an educational background that gives you a wider range of skill sets and the attributes that you need to move up the business ladder."

Steve Ehrlich came to a similar conclusion when he and his colleagues at Washington University in St. Louis set up the Liberal Arts and Business Certificate program two years ago. Ehrlich is assistant dean for undergraduate and special programs at University College, the evening division of Arts & Sciences, Washington University. "We live in a time of great change, so it's very important to understand how to live and work in an uncertain world," says Ehrlich. " We have to be able to come to decisions in quicker, wiser ways than we did before. And one of the ways to do this is to bring as many different perspectives to the table as possible, to anticipate the implications of the decisions we make. The value of being able to see the bigger picture is just immeasurable."

To their credit, a lot of managers seem to understand this instinctively; hence the popularity in recent years of books that attempt to distil management philosophies from historical and literary figures ranging from Ulysses S. Grant to William Shakespeare to Jesus. Unfortunately, those sound bite-size morsels of wit and wisdom are a poor substitute for a real familiarity with history and literature. "These books don't really tell you much about what Shakespeare has to say that's really of use to managers," says Professor Michael Egan, who, as both a Shakespearean scholar at the university of Massachusetts, Amherst, and a management consultant, is uniquely qualified to comment. "[The books are] conventional self-help books that throw in a few references to Shakespeare. The advice isn't exceptional. There's a lot more to the plays than that."

You may, for example, recognise Henry V's St. Crispin's Day speech as a masterpiece of motivational oratory. But one would be hard pressed to understand why the speech is so effective without at least a casual familiarity with Shakespeare's play. It is a liberal arts education that provides the necessary context. And by understanding the context, you, as a manager, can apply the lesson in your role as leader and motivator.

In his position as a consultant, Egan often draws on the lessons that can be derived from the great works of world literature, and he has found that when his clients are exposed to that material, they respond to it enthusiastically. "People are tremendously interested," he notes, "because Shakespeare is tremendously interesting."

As valuable as the liberal arts may be to your career, Salikof points out, recruiters still tend to focus on traditional business competencies when filling entry-level positions. Your knowledge of literature, history, art and philosophy will seldom be tested in the early stages of your career. Acquiring that knowledge, then, is largely a matter of personal responsibility, undertaken not because a recruiter is likely to question you on Henry V but because you understand that a familiarity with the classics will serve you well over the long haul. Keep that in mind as you work your way up the corporate ladder, and if your reading diet consists of leadership books by the management gurus du jour, add a volume of Shakespeare or Homer. Like Richard and Joan, you may find that the liberal arts path is the true one to a successful career in business. 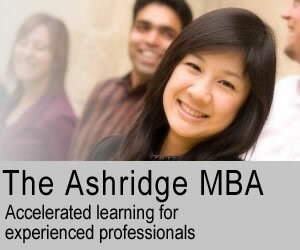